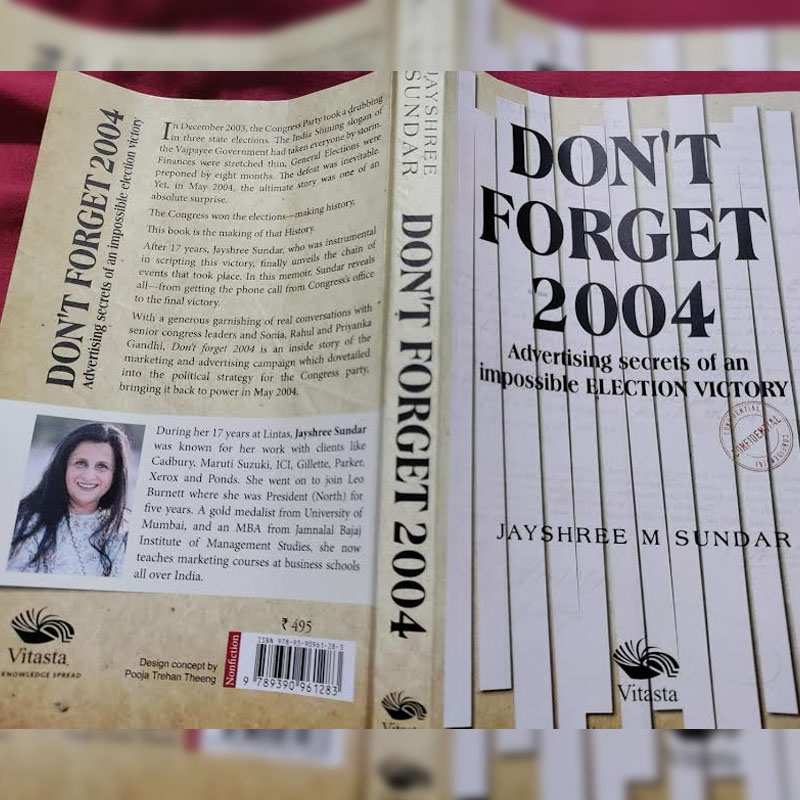 Mumbai: Political advertising and marketing case studies might be a bit boring for many. But once you pick up ‘Don’t Forget 2004 – The Publicity Secrets of an Impossible ELECTORAL VICTORY‘ by Jayshree M Sundar and start flipping through its pages, you won’t be able to put it down. Written in the style of a diary and a fast-paced personal narrative, it leaves you thirsty for more and barely feels like reading. The pages go by so fast, and before you know it, you’re at the end of the book, much richer in your understanding of what politicians think, how ad agency executives can interact with them and what it takes to craft a winning election strategy and brand campaign.

Some of us may remember Saatchi & Saatchi’s savage ‘Labour is not working’ campaign that brought Margaret Thatcher’s Conservatives to power in 1979. Jayshree and his team took a similar approach, working against impossible deadlines for a client who had no idea what political marketing direction he needed to take. What made it even more difficult was that the BJP looked smug as hell, spending top dollar on ads all over the country talking about how India was shining.

Through the book, you’ll find out how she and the agency’s creatives pivoted to getting quick answers through cheap and cheerful primary and secondary research. That and the fact that he approached the mission as a regular brand campaign helped him deliver a pitch presentation that was bought by senior Congressional leaders (I) steeped in the old ways of working. The response to the BJP’s India Shining slogan was “Aam aadmi ko kya mila?” “Congress Ka Haath aam aadmi ke Saath” and was aimed at the heartland of India, versus the former which was more focused on the urban Indian. The black and white visuals featured farmers, unemployed youth, middle class and children, women against the well-dressed urban Indians of the BJP.

Jayshree’s effort isn’t just a matter of words; she sprinkled the book with publicity illustrations that were published in the newspapers during the various phases of the campaign.

The communication and marketing strategy of Leo Burnett’s team worked well if you remember. Despite the BJP’s biggest advertising war chest, it and its allies only managed to retain 185 seats (1999 had 298). Congress (I), however, celebrated by winning 145 seats individually (compared to 112 seats in 1999) and 220 seats (compared to 135 in 1999) with its allies. He of course came to power, and the rest, they say, is history.

“Remember 2004” is essential reading for students and practitioners of marketing and advertising as well as those in the political ranks, since there is very little literature available on political advertising. It is rich in detail of learnings the agency had while working on the Congressional campaign (I). Be sure to take a copy.