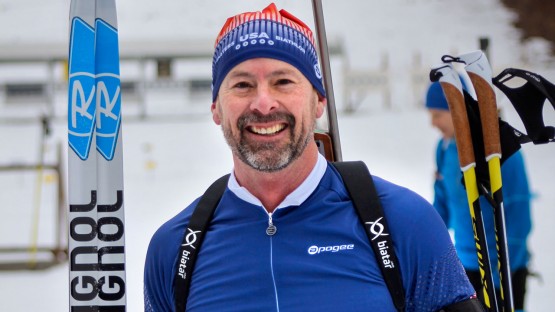 Craig Wiggers grew up in Alabama. During his 25-year career in the United States Marines, he served in Iraq and Afghanistan. So when he moved to Ithaca as a Cornell ROTC instructor in 2012, he wasn’t sure what to do with the snow.

“At first my wife and I spent our winters staring at the walls and waiting for spring,” said Wiggers, now director of administration in the physics department at the College of Arts and Sciences (A&S).

Then his friend Dinnie Sloman, a department head at the government ministry, who participated in Nordic biathlon – an Olympic sport that combines cross-country skiing and rifle shooting – convinced Wiggers to give it a try. After retiring from the Marines, he immersed himself in this demanding sport, which demands endurance, balance and precision. Through biathlon, he not only gained a community of fellow athletes, but a new perspective on his life.

“Now I’m excited and excited for the first layer of snow,” he said.

This year, Wiggers added “author” to their list of references – and told their story in an eBook, “Nordic Warrior? A Midlife Crisis in Biathlon, ”which he self-published via Kindle Publishing on Amazon. The little book, which includes fun training anecdotes, practical tips for new biathletes and tells how he coped with the death of a family friend, has sold over 200 copies (profits go to at the US Biathlon Association).

The book has garnered positive attention from blogs, magazines and readers around the world.

“The message is, it’s not too late to try something new,” Wiggers said. “With so much going on in the world and in our country right now, it’s been really nice to be able to focus on something else.”

Although he had experience with guns in the military, Wiggers never owned a firearm until his retirement – and he certainly never tried to shoot a target with a .22 caliber rifle at a distance of 50 meters while swinging on skis in the snow.

“You need the precision required in shooting and the level of endurance required in skiing, and this combination makes it very exciting,” he said. “Your heart rate is 170 beats per minute, and you’re trying to stay steady and hit that little target, and it’s really cold.”

A supportive community has helped him adjust to the rigors of the sport, he said.

“With so much going on in the world and in our country right now, it’s been really nice to be able to focus on something else.”

“The people are great,” he said. “There are former Olympians running, up to people like me, who are still trying to figure out how to stand on their skis. But everyone is treated the same.

Wiggers has always written about the experience – a teacher encouraged him to start journaling in fifth grade, and he never stopped – but started thinking last year of compiling the notes into a book. Very little has been written about biathlon, he said, and he wanted to cheer on other potential athletes.

For help, he turned to Paul McEuen, John A. Newman professor of physics at A&S, who is also a novelist.

“He said, ‘Do you want me to be honest with you?’ Wiggers recalls. “He said, ‘Dude, where are your chapters? You have to organize this. You have to break it.

Wiggers also enlisted the help of Briel Felton, an MFA student in the English department, as well as his mother. His wife, Betsy Wiggers, a graphic designer at ILR School, did the layout and cover for the book.

One of the biggest challenges, Wiggers said, was writing about the loss of Gregory Eells, former director of counseling and psychology at Cornell and father of his daughter’s best friend. The eels died from suicide in 2019.

“I wanted to include it because it’s part of life, it’s part of what we’ve been through,” he said. “But I also wanted to have a message of hope, to make sure people know that none of us are safe from depression and that we need to lean on and support each other. when we are faced with challenges. “

As a member of the New York State Biathlon Committee, Wiggers has worked to keep competitions safe amid the COVID-19 pandemic. He can’t wait to train and compete this winter.

“There aren’t a lot of people who come from Alabama to try Nordic biathlon,” he said. “I just jumped with both feet. It was one of those experiences that definitely changed my life.