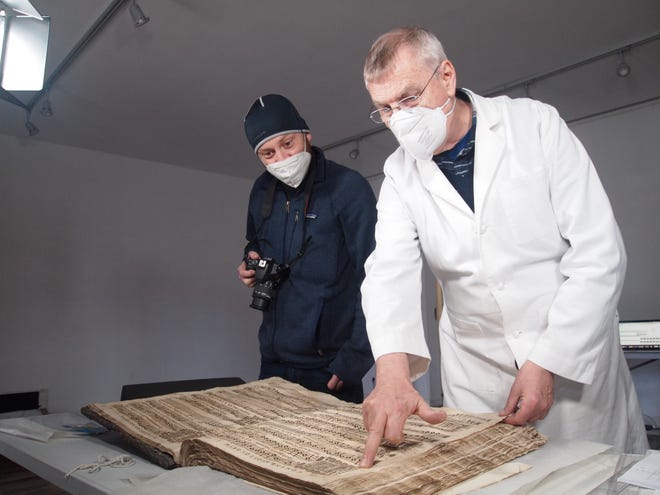 BOSTON — The only known surviving copy of a 400-year-old book heralded as a great treasure in the history of music in the Iberian Peninsula has been found in Portugal and is currently being digitized by Boston College.

Discovered in the co-cathedral of Miranda do Douro, in the district of Bragança, in the northeast of Portugal, this copy of the “Book of masses, magnificas and motets” by Diego de Bruceña is one of 40 printed in 1620 by Susana Muñoz, the greatest figure of modern Spain. prolific printer of sacred music.

Dr. Michael Noone, chair of Boston College’s music department, who has studied and performed Renaissance sacred music for decades, coordinates its digitization process.

“The fortuitous survival of a printing contract in which Susana Muñoz agreed to publish a huge choir book of sacred Latin works by the composer Diego de Bruceña (d. 1622) has fascinated scholars, but to this day not one only one copy of the book had been found,” Dr Noone told O Jornal. “Of the 40 books printed in 1620 and distributed to various European cathedrals, no other copies are known to have survived. “

The book was first located in 2015 by Celina Pinto, now director of the Museu da Terra in Miranda do Douro.

“In 2016, Celina’s uncle, António Rodrigues Mourinho, published an article describing the book and calling on experts with the necessary combination of musical skills to help uncover the secrets of the book,” Dr Noone said.

This call went unanswered until about three years ago when Dr. Noone visited Miranda do Douro. His research focuses on sacred music of the modern era, with particular emphasis on Spain and Latin America.

“I was very interested in how printing technologies were used for the dissemination of sacred music throughout the Iberian Peninsula,” he said. “In particular, I was interested in research on the involvement of women in the printing industry at the beginning of the 17th century. As soon as I examined the book, I determined that it was definitely a copy of the “lost” book that Susana Muñoz printed in 1620.”

He noted that this discovery not only helps preserve the most important body of work by a composer whose compositions were thought to be almost entirely lost, but also allows for a better understanding of the printing of sacred and choral music books. polyphony in the Iberian Peninsula in the 17th century.

“It was the missing piece of a set of sacred music books printed by Susana Muñoz in the early 17th century,” Dr Noone said. “The choirbook is important because it illustrates the too often overlooked contribution of women to the early years of musical printing in the Iberian Peninsula. The book, of course, testifies to the very active musical life of Miranda do Douro in the seventeenth century.

Measuring approximately 36 inches by 24 inches, the book has a wooden cover.

“The Bruceña Choir book is not in good condition, and we hope we can work on restoring it,” Dr Noone said.

The surviving copy has 210 pages, which means that 80 pages have been lost. They are filled with complex musical textures, both melodic and rhythmic.

“Among the many Portuguese scholars and musicians I have worked with, we must highlight the important contribution of Celina Pinto,” said Dr Noone. “More than anyone, it was Celina who carefully guided every step of our project.”

The scanning process can be particularly thorough since approximately 100 photos are taken of each page of the book. All of this work is done at the Museu da Terra as it would be nearly impossible to bring the book to Boston due to its fragile condition.

“The costs of the digitization process are borne by both Boston College and the Museu da Terra,” Dr Noone said.

The digital version will be made available not only to scholars and musicians, but also to the general public.

“In order to make the Chorus Book and its musical treasures accessible to scholars around the world and the general public, Boston College Libraries will host a website preserving high-resolution images of the Chorus Book along with commentary and explanations from some of the world’s foremost experts on music from the early 17th century,” said Dr Noone.

Being a Jesuit Catholic university, this project fits well with Boston College.

“The Jesuits celebrate the 400th anniversary of the canonization of Saints Ignatius and Francis Xavier,” said Dr Noone. “We see the project as a continuation of the Jesuit commitment to culture, scholarship and globalization through international scholarly collaborations like this. To the scholars of the Society of Jesus, Miranda [do Douro] is perhaps best known as the birthplace of the Jesuit Manuel Teixeira, rector of Cochin Jesuit College, former companion of Francisco Xavier in India and author of one of Xavier’s earliest biographies.

Dr Noone said some of the music preserved in the book has been transcribed into modern notation and will be heard for the first time at a concert on April 2 by the Renaissance Singers of London, conducted by David Allinson, a highly respected conductor and choirmaster specializing in the history and interpretation of Renaissance sacred music.

It’s something he wants to see replicated on this side of the Atlantic.

“We look forward to hosting concerts, recordings and videos of the music contained in the Bruceña Choir Book in the future,” Dr. Noone concluded.

Lurdes C. da Silva can be contacted at [email protected] To read more stories about the Portuguese-speaking community, in English and Portuguese, please visit ojornal.com.