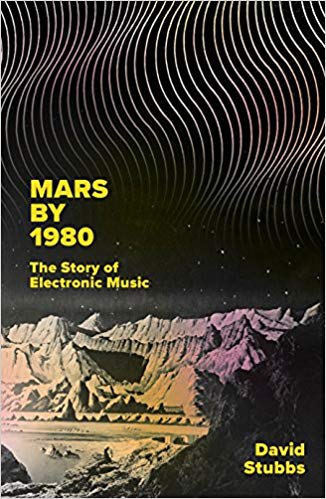 March by 1980: The Story of Electronic is the last book by famous author David Stubbs (Future Days: Krautrock and the Building of Modern Germany). Simon Tucker reviews.

David Stubbs is a courageous writer. Not content with trying to fit the story of one of the most diverse and influential musical scenes of all time (Krautrock) into a book, he now turns his gaze to another all-encompassing form. That of electronic music. Trying to break down this decades-old form of artistic expression into sections, providing the reader with a linear and engaging narrative, is a daunting task and will have (natural) pitfalls. The fact that people complain about the exclusion of those they think should certainly have a place in the history of electronic music. Stubbs himself recognizes this in the first Preface where he explains his intentions not to focus on one aspect of electronic music but on all its various mutations and also so that his book is not “exhaustive” or a “repertory”. . Instead, Stubbs tells us that this is a “personal and selective account that is more about aspects and angles, patterns and trails.” By telling us this in the preface, Stubbs protects himself from the aforementioned complaints and also opens his scope so that he is not married to the most widespread opinion of electronic music essentially following the Stockhausen – Radiophonic Workshop – Kraftwerk – Acid House – EDM (with some diversions in between).

Divided into four parts with subcategories within each, “Mars by 1980 ″ manages to highlight an unyielding music genre that has slipped its tentacles into almost every form of music we hear today. We start with a wonderfully written prehistory of the genre where we learn about such characters as Thaddeus Cahill (“a 115-pound, Washington-based hypermetabolic human dynamo”) who invented the Telharmonium before settling on Futurism and the Birth of Noise c. This is where the real story begins. Stubbs’ writing about these periods is exemplary as it manages to mark a point in history, full of scientific types and artists with great political and social statements to make, alive and flourishing. What could be, in the hands of lesser writers, a basic and laborious account of a period that may not be of interest to those seeking the truth about people like Autechre or Eno, instead becomes a drama. sparkling and exciting period with as much sociological intrigue and scandals as a BBC play.

Stubbs’ writing style is as much that of a Mars character in 1980 as it is of the people he talks about. The words flow and erupt like wonderful jazz, which helps make the book a quick read. Either you’ll fall in love with this style of writing or it won’t be your personal cup of tea, but personally this writer has a hard time not smiling when Stubbs writes lines like:

“Prince would take this principle to another level yet, the vocoder another electrical device on his Cupid’s bow of polymorphic perversity.”

and (describing a set by Dave Clarke)

“..A bass boost, a shift into seventh gear, and we’re catapulted out of the reference zone into the deep, black space of the present, propelled at the speed of the chain of pure techno.”

‘Mars by 1980 ′ is an essential document and a narrative in the history of electronic music. It can read like an academic text on the first try (indeed, many music and media studies departments would do well to include it in the curriculum) but once you come back to it a second / third / fourth time, you will find that you are drawn to chapters closer to your preferences and preferred time period, which makes the book incredibly readable. You will have fun cursing Stubbs for not including your favorites (even though he said it would happen from the start, you will still find it happening. It’s human nature. For this writer, it is. ‘exclusion of Frank Ocean in the electrification of the Soul chapter) while saluting him for drawing your attention to artists / mavericks / explorers that you did not know and whose contribution to the history of electronic music had completely escaped you . The other great achievement of Stubbs is his complete lack of musical snobbery which can be apparent in many books on a specific genre. He writes with as much love and precision about the works of Miles Davis as Fatboy Slim, never comparing their inherent “greatness” or their lack of “greatness” instead of placing them like pieces of the giant puzzle that is the history of electronic music and that has tracks being added every second of every day.

All the words of Simon Tucker. Other writings by Simon on Louder Than War can be found in its author’s archives. You can also find Simon on twitter as @ simontucker1979