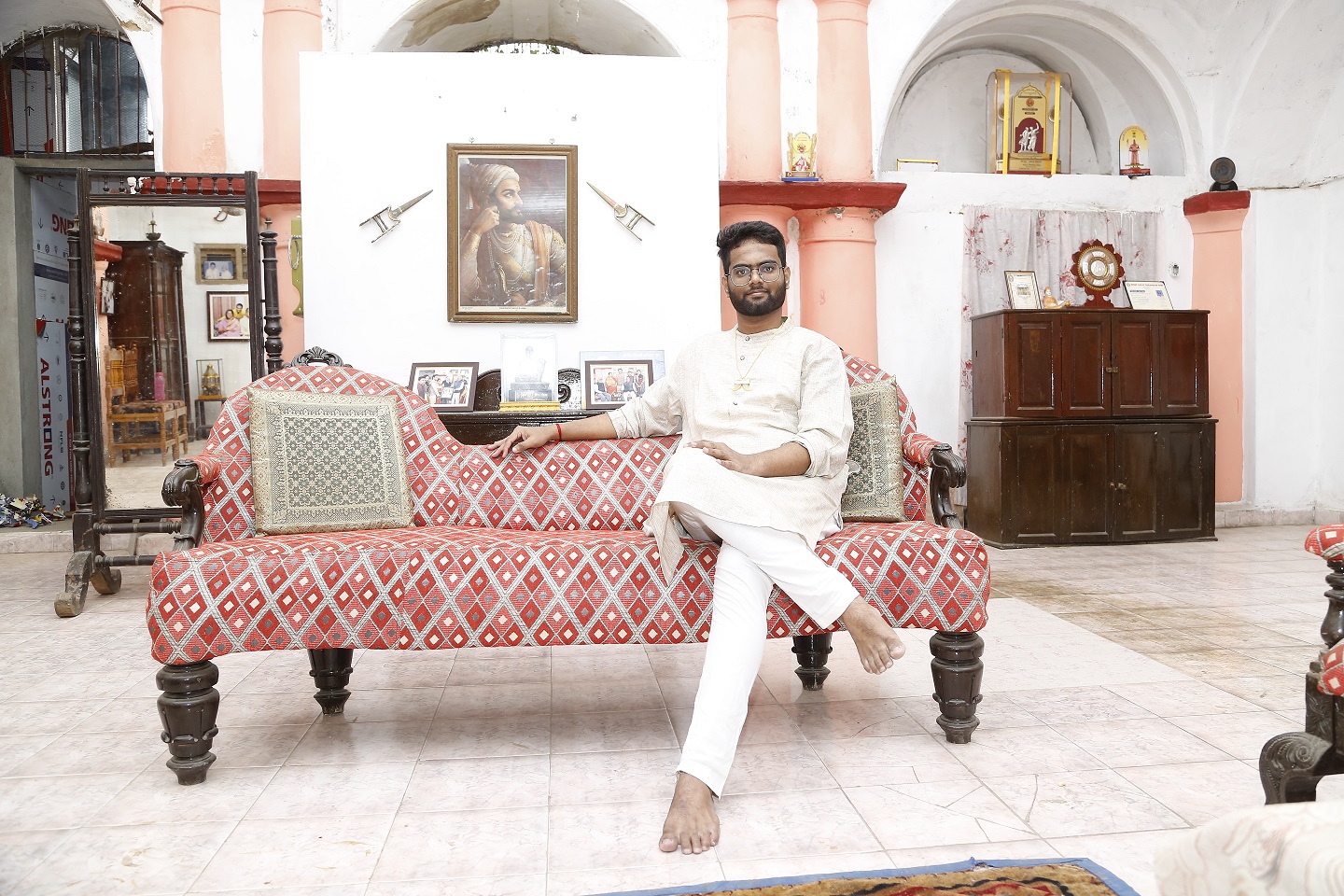 Compiled by Pratap Sinh Serfoji Raje Bhosle, the idea for the picture book “Rare Prints: A Tribute to Sarasvati Mahal Library of Thanjavur Maharaja Serfoji” is to raise awareness of the library’s varied collection and the Maratha Dynasty which ruled Thanjavur from 1676 to 1855

Images of Marathi kings with swords are common, but what about an image in which a king is holding a musket? A rare sketch of King Sambhaji (eldest son of Chhatrapati Shivaji) holding the musket in the recently released e-book Rare prints: a tribute to the Sarasvati Mahal library of Thanjavur Maharaja Serfoji shows how advanced our weapons were even a few centuries ago.

A portrait of Guru Nanak, founder of Sikhism, is part of the large collection held by the Sarasvati Mahal Library (TMSSML) of Maharaja Serfoji, one of the oldest libraries in Asia. The rare sketches and photographs of kings and princes add importance as this is the first time that such images have been published as an eBook.

Compiled by Pratap Sinh Serfoji Raje Bhosle, a descendant of the Thanjavur Maratha dynasty, the idea of ​​the picture book is to raise awareness about such a wonderful collection in the library and also the Maratha dynasty, which ruled the region of Thanjavur. present-day Tamil Nadu from 1676 to 1855.

The Thanjavur Palace Complex Library originated during the reign of Raghunath and his son Vijayaraghava (1600-1634) of the Nayak dynasty. After the Nayaks, the successive kings of the Maratha dynasty renovated and enriched the library. It was King Maratha Serfoji II who contributed the largest collection of books and manuscripts to the library during his reign (1798-1832). “Serfoji II was a scholar of great repute, mastering not only English but also Tamil, Telugu, Urdu, Sanskrit, French, German, Danish, Greek, Dutch and Latin. He even performed cataract operations. Music and dancing at the Durbar Palace flourished during his reign, ”says Pratap, who is the 14th descendant of the Thanjavur-Maratha family.

The TMSSML houses thousands of manuscripts and rare books. It was King Serfoji II who instructed those in charge of his library to start cataloging the manuscripts; the first palm leaf manuscript, according to Pratap, was cataloged in 1801 and the first paper manuscript in 1807.

It was while searching for the photographs of his grandfather Prince Tulajendra Rajah P Bhosle taken during the celebration of the anniversary of the birth of King Serfoji II that Pratap found the albums bound with rare sketches and photographs of kings and princes in one of the shelves of the library. However, he wished to obtain permission from the district collector to reproduce them for the benefit of researchers. “Many don’t know that the hardcover albums contain rare sketches and images. It was also a surprise to me. The compilation was difficult because I had to get permission from the district collector to reproduce the rare sketches and photographs, ”said Pratap, author of three books, including Contributions of the Maratha kings of Thanjavur. He also maintains a blog on Maratha cuisine.

“Sambhaji ruled the Maratha Empire for nine years. The king holding a musket shows how advanced the weapons of the Maratha kings were back then, ”explains Pratap. The southern staple food “sambhar” is said to be named after King Sambhaji. “Sambhar was born in the royal kitchen during the reign of King Shahaji II. When King Sambhaji visited Thanjavur, he was served a new dish, and from that point on, the dish was known as Sambhar, ”explains Pratap.

King Venkoji aka Ekoji Raje Bhosle was the founder of the Marathi rule in Thanjavur. He was the half-brother of Chhatrapati Shivaji, born to King Shahaji and Queen Tukabai in Bangalore. He ruled Thanjavur from 1676 to 1683.

Who was Maharani Tarabai? Historians say she was a strong woman who defended the Mughal occupation of the Maratha region. A portrait of Tarabai, who ruled the Maratha Empire for about eight years, included in the book is a great tribute to the Queen. The sketches of Rajmata Ahilyabai Holkar (1725-1795) who turned the village of Indore into a beautiful city, Maharaja Ranjeet Singh, the lion of the Punjab and the founder of the Sikh empire, Guru Nanak (1469-1539), founder of Sikhism, are also included in the book.

The sketches for the album named 119/3 Royal Academy Pictures were printed by Chitrashala Press, Pune. The image of King Shahaji II, who ruled Thanjavur from 1683 to 1712, adds importance as he was familiar with Sanskrit, Tamil, Telugu, Marathi, Hindi and Persian languages. “King Shahaji II was also a composer and musicologist. He composed many songs in praise of the deities of the Brihadeeswarar temple. His era was the golden age of literary activities. He built choultries, hospitals and had doctors from today’s Saudi Arabia, ”writes Pratap in Rare Prints.

The press logo established by Serfoji II is interesting. “The 1872 newspaper titled ‘Indian Antiquary’ Volume I mentions that King Serfoji’s printing press was the first printing press with Devanagari script printing in southern India. The types and blocks were prepared with soft stone and hardwood. Even today, TMSSML keeps some printed books in the press, ”he says.

A photocopy of an eye treatment card made by Serfoji II shows how the systems worked at the time. “Serfoji II was known as the prince of ophthalmology. Eye surgeries are said to take place at his research institute Dhanvantari mahal. Detailed ophthalmologic records were kept. The rajah himself has performed many cataract operations, ”writes Pratap.

A drawing of the herbarium-semparuthi (hibiscus) adds importance. Serfoji’s “Dhanvantari Mahal” produced medicinal plants. The king appointed artists to draw herbal plants in natural colors, to be documented for future reference. He maintained a garden of herbs and medicinal plants in the palace. “The library has three volumes with 92 herbarium images of medicinal plants hand painted in natural colors. I was only able to integrate a few images into this book, ”he says. The cover of Samuel Johnson’s dictionary (5th edition, 1784), with the signature of Serfoji II shows the king’s love for foreign languages.

Read also : Dear Diary, you are probably the most underrated story source in the world

TMSSML is one of the oldest libraries in Asia, with over 30,000 manuscripts, mostly in Sanskrit. “Serfoji II has collected over 4,500 books in English, French, Italian and Danish as well as books on musical notation. He signed all the books he had read, ”he adds.

Posted by Bookganga.com, Rare Prints has photos of the Sanskrit manuscript of Sabdarta Cintamani, which tells the story of the Mahabharata when read from left to right, and the Ramayana when read from right to left. A manuscript manuscript of Sivabharatam written in Sanskrit by Kavi Parmanand is another rare piece. It is a biographical work that tells about the youth and times of Chhatrapati Shivaji. “We only released the eBook due to the lockdown imposed by the pandemic. The printed version is ready. It will be released in a month, ”says Pratap.

Upon completion of the acquisition, HarperCollins will amend the terms of the Houghton Mifflin Harcourt Library eBook