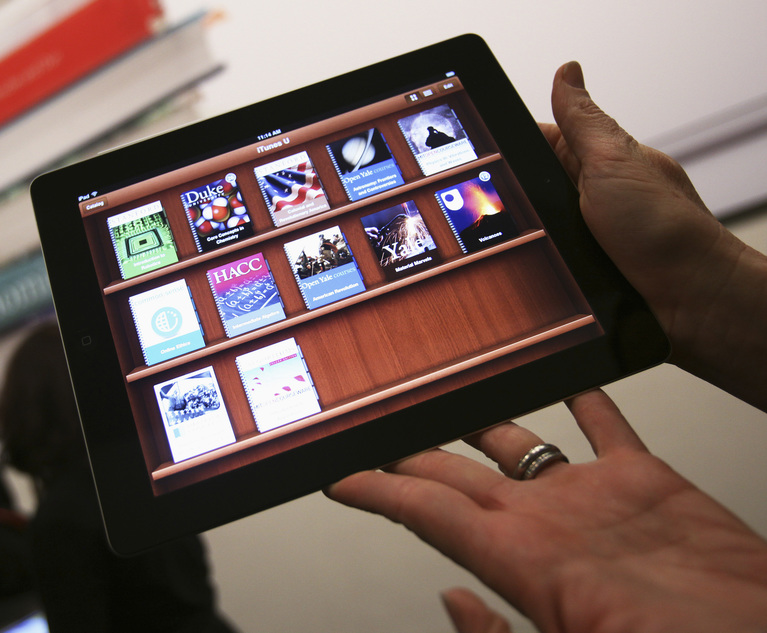 A federal judge sided with the Association of American Publishers on Monday, finding that a recently enacted Maryland library e-book law conflicts with federal copyright laws.

The AAP, the national trade association for the publishing industry, has filed a lawsuit against Maryland Attorney General Brian E. Frosh, in his official capacity, following the passage of the legislation, Md. Code, Educ. §§ 23-701, 23-702, which requires publishers to offer Maryland public libraries to license copyrighted electronic literary products, such as eBooks and audiobooks, and to warrant that the terms of these licenses are fair.

The AAP challenged the constitutionality of the law in its lawsuit filed in U.S. District Court for the District of Maryland on December 9, weeks before the law took effect on January 1.

Public libraries supported the legislation as a way for the public to gain access to copyrighted materials that publishers had previously withheld from libraries or offered on “economically unfavorable terms”. A book on the New York Times The best-selling list in December 2020 cost an individual consumer $22.05, but a license for the same product cost libraries $95, Judge Deborah L. Boardman ruled in February, granting the motion of the AAP for a preliminary injunction – finding that the state law likely conflicted with the federal government. copyright.

The state opposed the motion and decided to dismiss the lawsuit, noting that the law only requires “an ‘offer of license’ and does not explicitly require publishers to grant licenses to libraries.” However, a publisher who does not license libraries may face severe civil or criminal penalties under the Consumer Protection Act of Maryland, Md. Code Ann., Com. Law §13-401, according to the opinion of February.

On March 28, Boardman issued a show cause order asking the state why the preliminary injunction should not be permanent. The state argued that a permanent injunction is “unnecessary because the state has not and will not enforce Maryland law.” Additionally, the state saw that a declaratory judgment would provide relief to the AAP.

On the contrary, the AAP argued that a “declaratory judgment, on its own, is insufficient and that a permanent injunction is justified because the standard is met and the state’s assertions that it will not enforce Maryland law are insufficient to protect publishers’ rights,” according to Boardman’s opinion filed Monday.

The other counts of express preemption, violation of the dormant commerce clause, and violation of the due process clauses of the Fifth and Fourteenth Amendments were dismissed. The state’s motion to dismiss was dismissed as moot.

“We thank Judge Deborah L. Boardman for issuing a clear ruling that protects the exclusive rights that underlie U.S. copyright law and the means by which authors and publishers make so many contributions intellectual and economic to society and in the long term. public interest,” said Maria A. Pallante, president and CEO of AAP, in a statement Monday. “The decision underscores the fundamental legal principle that has never been questioned by those who respect and rely on our copyright system, and which Judge Boardman succinctly stated in her February analysis: It is only through copyright protection that books and other creative works can be generated and distributed at all.’”

While reviewing the considerations of other courts as to whether a state law that requires owners to license copyrighted works conflicts with copyright law, the case the most similar came from the 1999 Third Circuit ruling in Orson, Inc. vs. Miramax Film Corp,. In OrsonThe court considered whether Pennsylvania’s law regarding the Fair Trade Practices Act for Feature Films conflicts with copyright law in which a Philadelphia movie theater owner claimed that Miramax Film Corp. featured films in the geographic area where Miramax distributed films, but it “rarely received second-run films”. movies after the forty-second day of play at [another area theatre] despite repeated requests,” Boardman’s opinion stated in February.

The Third Circuit held that state law was preempted and recognized that copyright law “grants copyright owners the exclusive right to distribute their copyrighted works” , according to the opinion.

Boardman rejected Maryland’s argument that Orson is unconvincing because the circuit court held that Pennsylvania law “”appropriated a copyrighted product for commercial use against the will of the copyright owner,” and that the reasoning does not apply to Maryland law because it does not involve commercial exploitation because libraries perform “a noncommercial function,” according to the opinion.

“Although Maryland law and Pennsylvania law are not identical, they are similar enough that the reasoning in Orson applies here,” Boardman wrote. “Both state statutes imply the exclusive right to distribute, which includes the right to refuse to distribute. Like Pennsylvania law, the Maryland Act imposes on publishers – against their will and interests – the obligation to offer a copyrighted work to a portion of the public after their initial decision to offer a license for the same work to another part of the public. If publishers exercise their right to withhold from licensing their copyrighted work to libraries, they open themselves to potential liability under Maryland law, just like movie distributors. subject to Pennsylvania law. The liability potential “for the [publisher’s] the exercise of his federal rights. . . illustrates the conflict created by the Maryland Act.

The Maryland AG office further asserted that the decisions of the United States District Court for the Southern District of Ohio and the United States Court of Appeals for the Sixth Circuit in Allied Artists Pictures Corp. against Rhodos are more similar to the present case than Orson. In Allied Artistsmotion picture producers and distributors sued the governor of Ohio alleging that recently enacted laws in Ohio regulating the terms of motion picture licenses were preempted by copyright law.

Ohio law has banned “blind bidding,” a term used in the industry to describe licensing a movie to a theater owner without the owner viewing the movie first. ; prohibits mandatory minimum payments and advances required more than 14 days before the screening of films; and set certain parameters for the auctions, according to the opinion.

The District Court of Allied Artists held that copyright law does not guarantee “rightholders the right to market products with unfair tactics or distribute them in a manner deemed more desirable”, and therefore plaintiffs “hold[ed] complete control over the rights granted by the Copyright Act: to prohibit display, performance, reproduction and distribution,” the opinion states.

On Monday, Pallante said Boardman’s decision, along with New York Governor Kathy Hochul’s veto of an almost identical bill on constitutional grounds “sends a double message to other legislatures under pressure. similar: there is no sense in undermining authors or the viability of an independent publishing industry.

The Maryland attorney general’s office declined to comment on Tuesday.