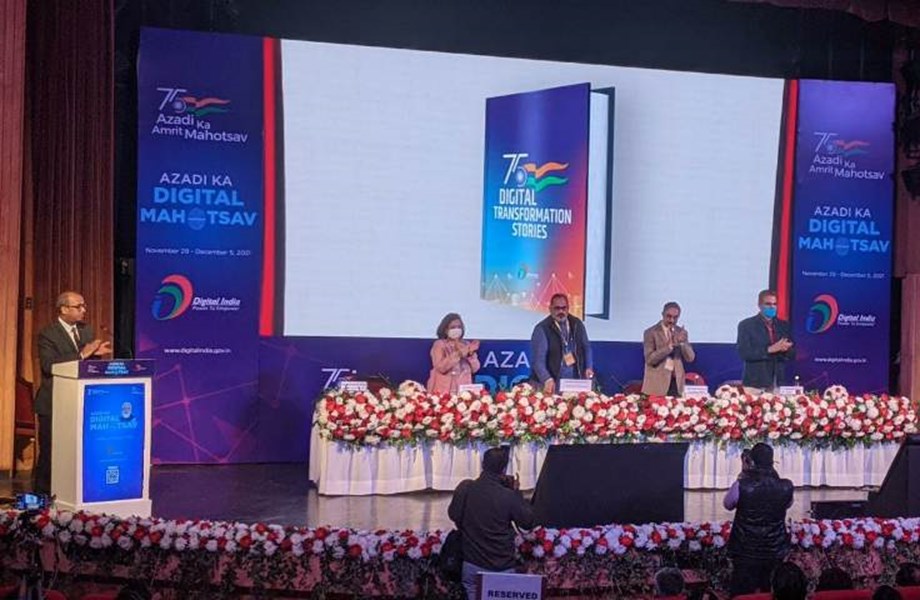 A week-long Azadi Ka Digital Mahotsav was inaugurated by Mr. Rajeev Chandrasekhar, Minister of State for Skills Development, Entrepreneurship and Electronics and IT, Government of India on November 29, 2021 at the India Habitat Center, New Delhi. Other dignitaries on the stage were Shri Ajay Sawhney, Secretary-MeitY, and Dr Rajendra Kumar, Addl. Secretary-MeitY, Mrs. Debjani Ghosh, President-NASSCOM and Shri Abhishek Singh, CEO-MyGov and NeGD.

Shri Rajeev Chandrasekhar in his speech said 2021 is a remarkable year. Digital India has proven the resilience of digital infrastructure and services and India has become a more confident and optimistic nation in the post-pandemic world. He recalled that Digital India has made a huge contribution to transforming people’s lives, creating a digital economy and creating a strategic advantage for the country. Recognizing the growing intensity of technology and citizens’ aspirations for the future, he summarized the actions required on six fronts, namely connectivity for all, the digitization of government services and products focused on architecture, trillion dollar digital economy in India, global standard law, leadership position in advanced technology esp. Artificial intelligence and 5G and a large-scale pool of skills and talents. He concluded that the implementation requires Sabka Saath Sabka Vikas, Sabka Vishwas and Sabka Prayaas.

Shri Ajay Sawhney said now is the time to celebrate what we have achieved and to chart a course of action for the future and to make India a new one. He said that a plethora of digital services are up and running and now is the time for the harmonization of stand-alone silo projects in the social sectors to be done through nationwide public digital platforms in partnership with industry. It emphasizes single sign-on, multiple windows to obtain a full range of services and the choice of citizens to visit service delivery centers in assisted mode. He also touched on the manufacturing of digital products in India, especially using emerging technologies.

While addressing the event, Shri Abhishek Singh, CEO of MyGov and NeGD, highlighted the digital transformation initiatives, paid tribute to the contributors to the founding of Digital India and said that the vision of Digital India is the driving force of current and future digital initiatives and all efforts. being made to achieve the same. He briefly spoke about the program of the event over the next 7 days, covering topics namely Digital India – Public Platforms and State Initiatives, Emerging Technologies including AI, Meity Startup Hub, Making India Aatmanirbhar in Manufacturing electronics, Empowering citizens with CSCs, Swadeshi microprocessors and National Mission intensive computing, citizen engagement with MyGov and digital payment Utsav. He also informed that an exhibition of 50 booths has been opened and that the top 20 teams from public schools present AI-based solutions.

Dr Rajendra Kumar pointed out that India has entered the global digital space and now India is one of the biggest mobile manufacturing countries in the world. He also highlighted the continued efforts to move from applications to platforms, to make AatmaNirbhar Bharat in electronics manufacturing, to gain a foothold on emerging technologies – AI and 5G, to make advancements in cybersecurity and to develop a solid legal framework in the digital field, in particular in data protection.

The inaugural session saw the launch of 75 Success Stories under Digital India, a film about Digital India’s achievements, and 75 @ 75 India’s AI Journey. The policy of delivering UMANG services in assisted mode was also announced. The inaugural session was preceded by the opening of exhibition halls comprising around fifty stands on government and start-up initiatives.

(With inputs from GDP)