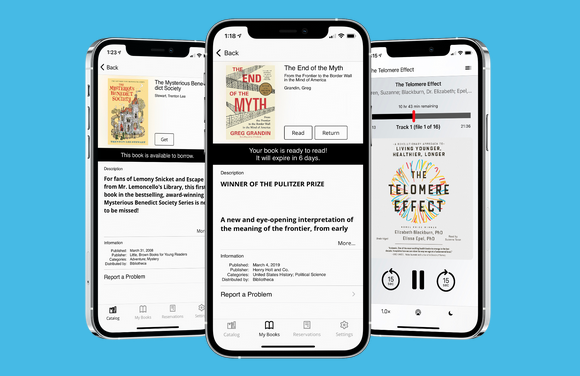 A single e-book platform to bring them together? That’s the vision behind Project Palace, the non-profit library-centric digital content platform that announced a major breakthrough this week with the official launch of the Palace app for patrons.

Now available for download from app stores (for iOS and Android), the Palace app allows users of participating libraries to potentially access all of their library’s digital content through a single interface, including licensed content. through Palace’s own marketplace as well as through most major library e-book providers including OverDrive, Baker and Taylor, Bibliotheca and Bibliolabs.

Announced last June with $5 million in funding from the John S. and James L. Knight Foundation, the Palace Project is a joint venture between the Digital Public Library of America and LYRASIS. It builds on an existing collaboration between the two entities, using open source code designed and developed by Library Simplified for its SimplyE app, a New York Public Library company.

The goal of the Palace Project: a “library-centric” platform to deliver e-books and digital audio to patrons. This is an ambitious mission in the still relatively young and evolving digital library market, where access to content is mostly licensed and has so far been dominated by corporations.

“This community initiative is informed by the library’s values ​​and ensures a needs-driven option for the library to maximize access to e-content offerings for patrons,” said Michele Kimpton, Senior Director of The Palace Project, in a press release. “Our primary goal is to support the mission of public libraries by increasing equitable access to electronic content and moving the library-customer relationship into the virtual realm.”

In addition to offering customers a single interface to access digital library content from various vendors, the Palace Project is also working directly with publishers to license content on more flexible terms through its own exchange, known as name of Palace Marketplace, (formerly the DPLA exchange), which Palace officials say is currently the only not-for-profit e-content marketplace. In a major breakthrough last year, Amazon Publishing agreed to make its digital content available to libraries for the first time through Palace Marketplace.

Meanwhile, the participation of OverDrive, with its popular online loan apps Libby and Sora (for schools), in the Palace Project is hailed as a major step forward.

“OverDrive is a crucial provider of digital content and adding them to The Palace project is a major win for public libraries,” Kimpton said in a statement announcing the company’s participation. Kimpton said the addition of OverDrive, the far-reaching market leader in the digital library space, “will put even more content in the hands of library users around the world.”

Palace officials said libraries currently using The Palace Project should be able to access their OverDrive titles in the app in the coming weeks. OverDrive titles will also remain available to customers through the Libby app.

Palace currently serves more than 100 libraries and is working in some states to offer e-book collections through state libraries.

For more information on The Palace Project [email protected]